Workforce of the Future?

At 23, Kriston Moore works at a McDonald’s for $7.25 an hour.  A single father of three children under four years old, he wants to increase his earning potential beyond minimum wage. 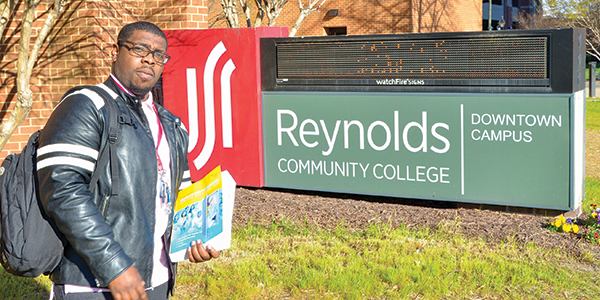 When he graduates, Kriston Moore will have the skills to land a job paying twice what he’s making now. Photo by Rick DeBerry

Moore enrolled in a program known as Middle College. He has obtained a GED (the equivalent of a high school diploma) and a manufacturing technician certificate. Now he’s a student in a five-month course that will earn him a CLA, short for certified logistics associate. When he graduates in June, Moore will have the skills to work as a technician in the warehouse and distribution industries, where he could earn twice what he’s making now.

“I want a good-paying job in manufacturing to the support the children,” he says.

Moore learned the value of an education the hard way. Homeless at 14, he says he knocked around Chicago and didn’t finish high school. While he was able to make “good money” working in a commercial kitchen, he moved to Richmond and decided to get his high school diploma.

“the focus has moved to: ‘What can we do to help individuals coming through this program get jobs? How do we meet the demands of the employers in our region in training the workforce to be ready?’ ”

That’s when he found out about Middle College at Reynolds Community College in downtown Richmond. It’s one of eight Virginia community colleges helping young adults, ages 18 to 24, obtain their GEDs and continue on to college. That’s been the traditional design of Middle College, which started in 2003 and helps about 2,000 students a year.

With Virginia’s increased emphasis on workforce credentials, however, Middle College is evolving. It’s beginning to focus more on short-term skill training programs that may be supported by grants from area employers.

In another new wrinkle, Reynolds Community College is piloting a different design model in the program. Under this approach, the college partners with existing adult-education resources for academic courses, while integrating workforce training into the instruction for high-demand fields such as logistics, nursing and customer service. The training leads to industry-recognized credentials, which help the students get jobs.

While some Middle College students pursue two- or four-year college degrees, that path is the exception rather than the rule, says Jim Andre,  director of Middle College and Adult Career Services. After getting their GEDs, many students immediately go to work or join the military.  In response to that trend, “the focus has moved to: ‘What can we do to help individuals coming through this program get jobs? How do we meet the demands of the employers in our region in training the workforce to be ready?’ ”

By matching up young adults with Middle College (which they can attend for free), Andre believes community colleges are helping to build the workforce of the future. “There are a lot of young Virginians out there, a growing number, who aren’t connected to any kind of education, and they are economically wandering,” he says. “ … In an era of low unemployment, these are the folks that we can help be career-ready for Virginia’s high-demand career occupations.”

After receiving a two-year, $1 million grant this past fall from USA Funds, a nonprofit that focuses on higher education and workforce challenges, the Community College Workforce Alliance — in conjunction with Reynolds and John Tyler Community College in Midlothian — is expanding and creating programs that Andre hopes to roll out statewide. The grant should serve about 135 young adults, with a focus on African-American and Hispanic Virginians. The money provides eligible students with everything they need to complete a short-term, workforce-training program. “We want to help them work towards a career, instead of just trying to get a job,” says Mary Jo Washko, who directs the Middle College program at Reynolds.

For instance, Washko says the CLA qualifies students for more than a “pick-and-pull” job in logistics. “It helps their exposure to the field of logistics.” With Richmond home to a deep-water hub and located at the crossroads of major interstates, there are jobs in the area. Plus, instructors help students make connections with employers in the field, she says.

Middle College has long enjoyed partnerships and grant support from the business community, adds Washko.  Capital One Financial Corp., Virginia Credit Union, Goodwill Industries and the Jackson Foundation all have been past supporters.

One of the strengths of Middle College, says Washko, is that students feel they have a home base on campus. Located in a corner nook in Room 626 on the Reynolds campus, the space has a computer lab and a classroom. It draws about 350 applicants a year.

To be considered for one of the new programs like logistics, applicants must be able to score at a ninth-grade level or above on math and reading tests. They also must commit to a five-month program, sign a commitment form and submit an essay on why they didn’t finish high school.  Students attend class for a half a day Monday through Thursday.

“A lot of our students don’t have great support systems,” says Washko.  Many of the students have children and child-care issues, and others will be the first in their families to graduate from high school.

Moore agrees. “The staff, the teachers: They do not want to see you fail. They want you to succeed. It makes you feel so special.”

Moore enjoys being in a class of 50 other students, and he likes the idea of graduating with his classmates.  Middle College, he says, “opened up my mind and gave me a different mindset. It brightened my horizons. I’ve got my GED now, which opens me up to a lot more jobs. So why not go on, instead of putting yourself in a box?”

Donald Pippin, director of Middle College for Danville Community College since 2007, says the program is life changing for students and teachers. “We have a lot of students who have babies, a lot who have no home support, and some of them live in homes where no one has ever worked or had a high-school diploma  … We have several students who are homeless, and some don’t have food,” he says. “When they get that GED and graduate, it’s a big thing for them.”

Danville Community College throws a graduation celebration with caps and gowns, a processional march, special awards and a party. “For many of our students, this is the first accolade they have ever received for an academic credit,” says Pippin.

Typically, Danville’s program has about 65 to 70 students a year, most of them African-American women. Of this number, nearly 80 percent obtain their GED and about 55 percent enroll in college to pursue a degree, says Pippin. Before they leave the program, 96 percent earn a National Career Readiness certificate. That credential is good in any state, assuring employers that a student has certain workforce skills.

For a larger picture of the program’s impact, Pippin offers these statistics. From fall 2004 through December 2016, 781 students enrolled in Danville’s Middle College classes. Of that group, 483, or nearly 62 percent, earned their GED, and 542, or 69 percent, earned  career readiness certification.

Danville offers short-term training programs in welding and precision machines, and some of its students go on to get jobs at BWX Technologies Inc., a nuclear power company in Lynchburg. “They need something more than a GED,” says Pippin. “That’s why we put them in short-term skill programs, to get them in the workforce, to get them wages and jobs, and to be productive citizens in the community.”

While Middle College programs are free, college is not.  Nearly all of former Middle College students are eligible for federal Pell grants to help pay for tuition, says Pippin.

“It makes sense that we are shifting as different avenues of opportunity become available,” he says. “We know nationally that, when it comes to industry certification credentials, one out of three who earn a credential go on to earn traditional college degrees. That’s more practical on the front end and more valuable to the people we’re serving.”

November 16, 2022
Listening to Alumni About How Education Enriches Lives

A 12-week internship for individuals who are bold, curious, motivated team players — and passionate about advancing equity.

Sophomore engineering ‘rock star’ learns to become a leader while following in the HBCU grad footsteps of his parents and brother.

As a natural leader, student embraces opportunities to work in her field and build campus community

With a passion for writing and teaching, student seeks ways to teach while she’s still learning